Join Chicago-North Shore as we experience a docent-led tour followed by a panel discussion on the exhibition "Rise Up: Stonewall and the LGBTQ Rights Movement" 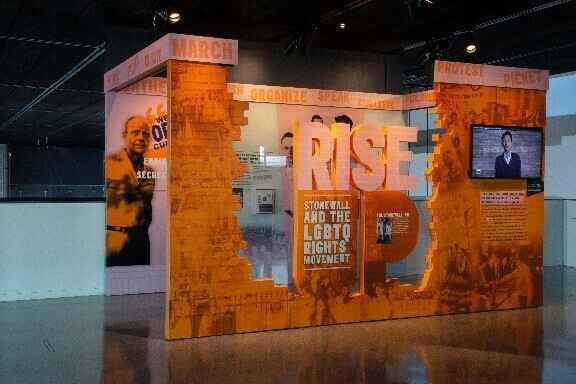 There are currently no tickets available for this event, but you can still make a donation.

The "Rise Up:" Exhibit explores the June 1969 police raid of the Stonewall Inn as the flashpoint that ignited the modern gay rights movement in the United States. In the fifty years since the Stonewall Uprising, America's LGBTQ population has struggled for equal rights and representation under the law.

While grounded in the Stonewall Uprising, connections to Chicago and celebrations of LGBTQ+ pride in Chicagoland are on display, including images of the first gay pride parade in Chicago in 1970 and photographs of recent pride celebrations. The exhibition also features a gallery project showing the 400+ Chicago LGBTQ Hall of Fame inductees.
Panelists -
Gearah Goldstein - Co-founder GenderCool - (she/her) is a nationally-recognized Diversity & Inclusion Consultant, with an expertise in transgender and non-binary policies and procedures within businesses, organizations, government agencies, hospital networks, law-enforcement personnel, and schools. She has appeared on NBC and CBS national news, The Today Show, Rolling Stone Magazine, The New York Times, and many other national outlets. She is also co-founder of The GenderCool Project, a national storytelling campaign that showcases successful and talented young people who identify as transgender. GenderCool is empowering the world to see diversity as positive and important.
Dr. Edmund Yomtoob - Clinical Psychologist - grew up in West Rogers Park. After graduating with a Doctorate in Clinical Psychology from the Chicago School of Professional Psychology, He continued his passion for teaching and community service. He was adjunct faculty at The Chicago School in several Master’s-level and Doctoral-level departments. Dr. Yomtoob has volunteered hundreds of hours to the American Foundation for Suicide Prevention, including Loss and Healing and the LGBTQ Taskforce. He also travels around the country training professionals and lay-people on how to develop and implement post-suicide grief groups.

Rabbi D'ror Chankin-Gould - Anshe Emet Synagogue, Chicago - Rabbi Chankin-Gould is a southern California native and the first openly gay man to be ordained by the Ziegler School of Rabbinic Studies, following the Conservative Movement decision to open ordination to LGBTQ individuals. Subsequent to his ordination in 2013, he served for two years as the Senior Jewish Campus Service Corps fellow at Columbia/Barnard Hillel. Rabbi Chankin-Gould came to Anshe Emet Synagogue in 2015, where he partners with JCFS (including the Safer Synagogues Initiative), the AES Caring Committees, and the AES Inclusion Committee to ensure that all members of the community are supported in their time of need.

You can support us by making a donation!